As a keen bread-baker, I just can't leave World Bread Day out. After discussing the roots of this passion of mine, I also share a recipe for a kind of bread I really like. Finally, I've collected the other breads which I've written about in English.

* * *
Once upon a time, I had a friend whose family had a bread-maker at home. They were really proud of it because that time it wasn't easy at all to get such a machine in my country (Hungary). I also saw it work, I also smelt the bread while baking, and later I was also allowed to use it. And I immediately knew that I would also like to have one.

Many years later my dream came true. So I began to bake my bread at home, and I also began to experiment with different kinds of flour and flavourings. I also realized that it's great for kneading any kind of yeasted dough, which can be shaped and baked in the oven. Maybe it's not as confortable as if the machine had baked it, but it's still a good method for pizza, rolls or croissants.

The new era began when I bought a new cooker as well, with a really good oven, and realized that even the bread was much better when I baked it there. However, when I didn't have much time, I still used the machine quite a lot.

Nowadays I use wholemeal flour only (mainly wheat and rye, but I'm always willing to try new kinds), and I have some really good recipes I can always use. I still like experimenting, though. I quite often knead the dough by hand, but sometimes (rarely) I have the machine do it for me. I haven't bought bread, rolls or anything like that for years. I believe it's worth taking the trouble and baking all these things at home.

Last year I started my blog, and, of course, I put these recipes there (among a lot of others). And I remember I was really glad when I learnt about BreadBakingDay for the first time. I thought it was really my cup of tea: baking bread and writing about it. And do this in English, which is good practice for me. And reading others' recipes, and trying them, and getting new ideas from all over the world. When possible, for these rounds I make things which are typical in my country or in this region, and I really love reading about (and trying) breads which are typical elsewhere in the world.

* * *
This time I would like to share a new discovery of mine. It's a small bread called pogácsa, a rather popular kind of cake in Hungary (I've discussed this here earlier). Pogácsa with potatoes is really widespread, and the mashed potatoes make the dough softer and delay drying. This one is similar, but instead of potatoes, Jerusalem artichokes (sunchokes - well, I haven't heard this word for it before, but I really like it! :) are used, which add extra flavour to the cake (of course, it can be made with potatoes as well, but the flavour will be much different). (I grow the sunchokes in my garden; for pictures please click here and here.)

* * *
Other recipes for breads I've shared in English (all were BBD entries): 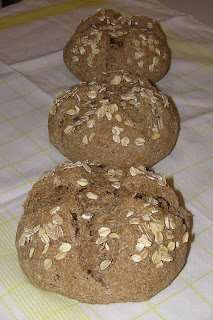 Looks beautiful. Never heard of a bread with sunchokes before.

Wonderful post, for me too it's a long time ago I bought bread in a shop.

Thx for the interesting recipe and your participation in WBD'08.

I am so happy to find this Pogasca, I've been planning to make this, but never really able to do so. I have the Hungarian cookbook that has the recipe, but the instruction is not really clear. Finding your recipe here make me so happy, though I am planning to make the one with quark in it. I think I wouldn't mind to try yours with jerusalem Artichokes.
Cheers,
Elra