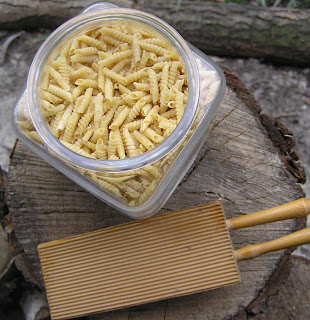 Lebbencs, szélesmetélt, nagykocka or tarhonya is not as famous as spaghetti, macaroni, fusilli or penne, but equally versatile – and delicious. Unlike the Italian, who make their pasta from durum wheat flour and water, we, Hungarians use regular wheat and eggs. In fact, we have ‘x tojásos száraztészta’, where x marks the number of eggs used per kilo of flour. Of course, they can be bought ready-made, but I prefer making them at home. After all, my great-grandma also did that…

What I do in a different way today is that I use wholemeal flour, which is better for one’s health, instead of regular white flour. Otherwise the method is the same. I usually make a batch from of flour and 2 eggs. Depending on the size of the eggs, I might also need to add a little water to get some smooth dough, which is neither too dry and nor too wet. After kneading it I roll it out to get very thin sheets, which I cut to different shapes. In fact, lebbencs is not cut at all – it is torn to irregular shapes by hand. Szélesmetélt means about one centimetre wide stripes, and nagykocka means about by squares. Tarhonya is not cut – it is made from tougher dough, and it is not rolled out, it is grated. These can be cooked right away or they can be dried and stored in a dry, well-aired place for later use (typically in linen bags or cardboard boxes).

There are other varieties made from this dough as well. These are called levestészta, which is an umbrella term for aprókocka (small squares), eperlevél (with pinked edges), cérnametélt (vermicelli) or csiga (swirl – because of its shape; see the picture above). They are smaller pieces and they are used to enrich soups. It requires a lot of patience and practice to cut them to even pieces!

As for the dishes prepared of them, here are some examples:

A very quick and versatile method is to cook them with plenty of water, drain them and put some topping on them: ground walnuts, poppy seed, cheese and sour cream, cottage cheese, browned semolina, fried cabbages or mashed potatoes. Some of these dishes have sweet and savoury versions as well. And, of course, these traditional flavours can be made different with a twist.

Another method is to prepare rich soups or main courses from them. The first step is always to brown the tészta with some fat (traditionally lard rendered from bacon, but oil can also be used instead), then add vegetables (onions, potatoes, green peppers, maybe even carrots or parsley roots), meat or sausages and water, and simmer it until everything is soft. As for the seasoning, salt and paprika powder is used. These are traditional shepherds’ meals, prepared in a special pot (called bogrács) on an open fire. But, of course, they can also be cooked in a saucepan on a cooker :)

Levestészta is tipically used for meat soup or clear soup. Instead of dried levestészta, we sometimes use freshly-made dough (eggs, flour and salt mixed together with a wooden spoon) to make csipetke or nokedli. The latter can also be cooked in water and served as garnish for stew, or fried with scrambled eggs and served as a standalone dish with mixed pickles (csalamádé).

Another kind of dough is made from mashed potatoes, and used right away. These can be filled with fresh or frozen fruits, or even with thick jam, and after cooking in plenty of water, covered with browned breadcrumbs. They can be round (gombóc) or flat (derelye).

Noodles with apples and walnuts

Hi, as you can see this is my first post here.
I will be happy to receive some help at the beginning.
Thanks in advance and good luck! :)