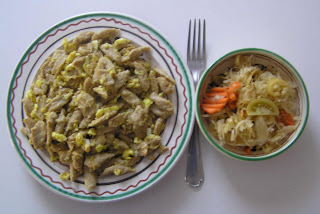 Dumplings can be served as garnish for stew, they can be used to enrich soups, or even a standalone dish can be made of them. Just follow this simple recipe:


A note about mixed pickles: This is usually made in autumn, just before the first frosts. The ingredients are those vegetables which are imperfect and cannot be stored for winter, and those which have not had time to get ripe: cabbages, carrots, small cucumbers, green peppers, unripe tomatoes, etc. They are cut into thin slices, seasoned with salt, peppercorn, caraway seeds, bay leaves and vinegar. The mix is put into jars rather tightly, then closed and steamed. It is typically served with rich foods.