Spaghetti with raw tomatoes and olives

I have a virtual friend, Zorra, who is also a gastro-blogger, and who lives in Spain, but as it turns out from this post of hers, she is originally from Switzerland. August 1st is Swiss National Day, that's why she has invited us to cook or bake something red, white or Swiss.

As for red, the first thing which came to my mind was the kilo of sun-ripen tomatoes I bought in the market in the morning. Well, what is white which goes well with tomatoes? Feta cheese, maybe?
And then I knew I would make one of my favourite summer dishes, though arranged in a different way for the occassion: 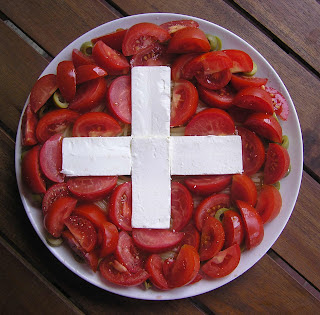 I brought plenty of water to the boil, added a teaspoon of salt and a tablespoon of oil, then put 120 grams of durum-wheat spaghetti in it. I covered the pot with a tightly-fitting lid, brought the whole thing to the boil again, and turned off the heat. According to the packaging of the pasta, it took ten minutes for it to become 'al dente'.
During this time I prepared the topping: I cut plenty of fresh tomatoes into eighths, cut four slices of feta cheese, and cut some olives into three rings each (by the way, the latter were Spanish ;)
Then I put the cooked pasta on a plate, arranged the topping on it, this time into a pattern resembling the Swiss flag, sprinkled it with a little freshly ground peppers and dribbled some olive oil on it.
Finally, I took it to the patio along with a fork, took some photos, and ate it. Well, it was delicious! :) 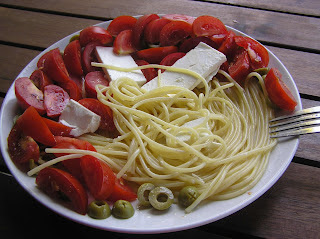 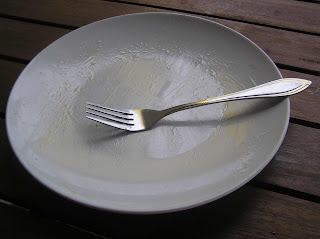 I like the cross! :-)))
Thank you for your participation.