I'm a huge fan of wholemeal flours and wholemeal breads, so I was really happy to read Jude's announcement of the next BBD. Maybe these breads are not so fluffy as those baked from white flour, but their taste and nutritional value is a generous compensation, I think.

This time I didn't try a new recipe for the event. I've decided to share the recipe I follow every week to bake a loaf or two. Of course, I often vary the flavouring/decoration, but the basic method is always the same. 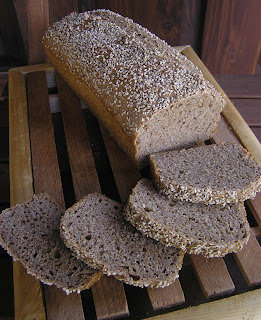 It is a variation of the no-knead bread, which mushroomed among Hungarian gastro-bloggers earlier this year. I also tried it, but from wholemeal flour, and developed this version:

It takes a long time to prepare, but only a little effort, since the longest phase is the raising, which doesn't require any action. I usually do it overnight when the weather is not too hot. However, in summer I prefer mixing the dough in the morning, and baking the loaf in the evening when it's not so hot and I can air the kitchen. 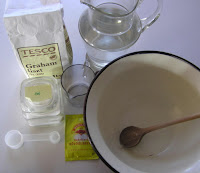 So about 13-14 hours before baking time I mix 500 g Graham or whole wheat flour, 2 tsp salt, 1/3 (yes, one third) tsp dried yeast (or 5 g fresh yeast) in a large bowl. (Variation: up to half of the flour can be changed to whole rye flour. However, this will result in a bit denser bread. Or any amount of whole wheat flour can be changed to whole spelt flour.) 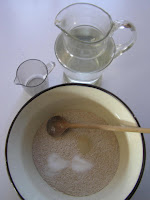 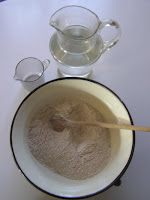 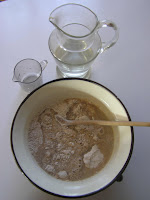 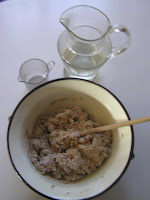 Then I add small amounts of water as necessary (not more than 500 ml is needed altogether, the exact amount depends on the quality of the flour, which varies slightly). The right consistency is like this: I should be able to mix it with a wooden spoon, but it should be soft enough (sticky, but that's why I use the wooden spoon). 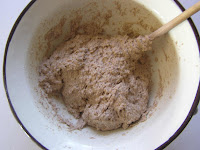 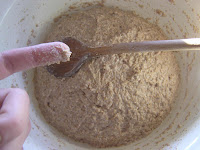 I cover it with a dish-towel, and leave it raise for about 12 hours (in summer shorter time is enough, in winter more might be necessary). 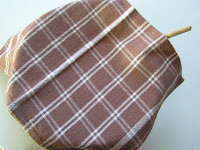 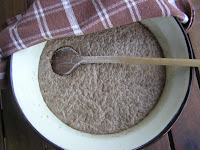 Then I mix it again with the wooden spoon (optionally, I add some seeds, too: sunflower, sesame, flax, coriander, caraway, etc.), and raise it again for about 1 hour. 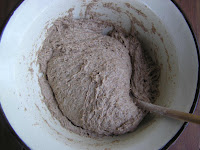 Meanwhile, I pre-heat the oven to the highest possible temperature (that is 250 degrees Celsius in my case). I grease a baking tin, and pour the dough into it. Important: I don't mix it again this time! 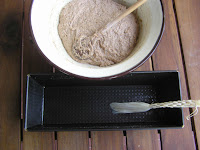 I don't align the top because it will raise a bit more while baking, and there will be a crack on top anyway. I usually decorate it with more seeds.

I put it into the hot oven, lower the heat to 200 degrees Celsius, and bake it for 30 minutes. Then I turn off the oven, but I leave it there for 10 more minutes. 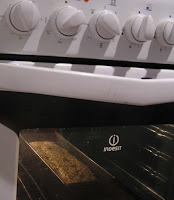 After that, I take it out of the oven, remove it from the tin, and leave it cool on a wooden rack. Preferably, I don't cut it immediately because it can be sliced much better about an hour later. 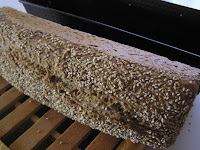 It can be stored for up to a week in a canvas bag, so I often make two loaves at the same time, thus saving energy.

If, for some reason, there are leftovers, I slice and dry them, and convert them into crumbs with a mincer (yes, this is what a vegetarian uses a mincer for :) The crumbs are great for rissoles, for layered vegetable dishes, or for certain cakes.
Bejegyezte: Dulmina dátum: szombat, augusztus 30, 2008

Whole grains really benefit from the long and slow fermentation. I bet this was really delicious. The results look amazing.

this looks fantastic. thanks for the step-by-step instructions. i will be trying it soon.

Great bread! Me too I began to bake breads in the evening in summer. ;-)